Cohost of the Noonish Live podcast

Board Member at The In Group International

• “The only realistic solution to power generation is distributed renewable backed by nuclear.”

• “So, I’ve been casually taking a Medical Neuroscience course… I’m fascinated by the brain, and how very, very little we understand about our own consciousness, biases, and abilities.”

• “I had been running for more than 5 hours when I slipped face first into the mud. I was only halfway done…”

• “Humans are not weak. We are vicious apex, land predators, remarkably strong for our size, one of the top distance runners, and amplified by simple tools, we conquered the world.”

I received a Google Cr-48 ChromeOS notebook through their beta testing program on Dec 20th.  Naturally no one bothered to tell me I had a package until after midnight.

The packaging carried no indication of what was inside.  Even the return address was a UPS address, kinda like a PO box.  My excitement grew as I tore through the outer layers, and it began to dawn on me what I was holding.

There are no markings on the outside of the notebook at all (except the keycaps).  No serial number, no model, no logos. 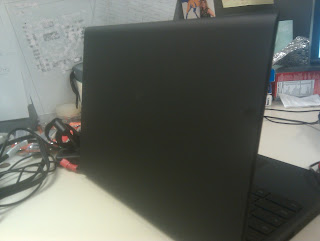 The notebook is about 9x12x.75" which is thick by comparison with the MacBook Air, but thinner than my Toshiba - or even the netbooks I have (thanks, Frank!).  The shell feels sort of rubberized.  It's actually a pleasing feel, like you can get a solid grip on it, and it isn't going to shatter or anything.

Speaking of which, the weight is a little heavier than it perhaps needs to be - but it feels good.  It isn't heavy, but it feels substantial.

The display is crisp and bright, and despite a few early reviews to the contrary, I'd say it has better visibility than the devices I'm used to, if anything. 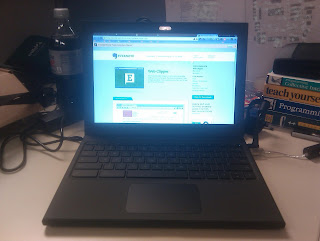 It has built in Wi-Fi which just works (asked for my passphrase at an appropriate time, etc).  The 3G from Verizon is another story, which I will mention more later.  I can also tether to my Android phone via USB with no additional setup.  Just works.  (Note: your phone has to support this, plus usual service provider disclaimers and warnings.) 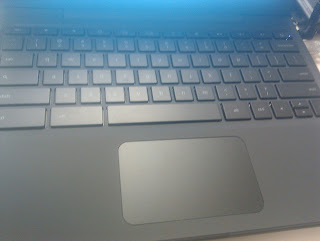 The keyboard layout is a little different.  There are no F-keys: 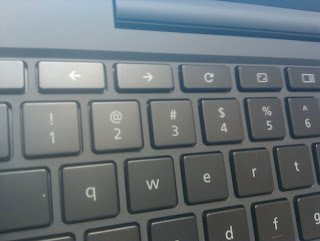 The key maps are: Forward,Back,Refresh,Full Screen, Window Switcher, Brightness Down, Brightness Up, Mute, Volume Down, Volume Up, and Power.  Also missing (finally someone listened to my pleas!!) isthe Caps Lock key which may be the greatest step into the future of computing since the invention of Ethernet. 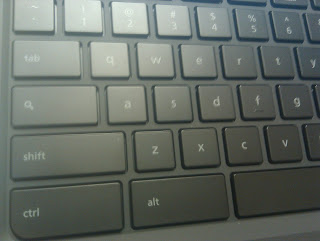 It's replaced with a Search key. Go figure.  However, pressing the key may not have the response you expect.  It opens a new tab in the current window. Pressing it again on the new tab closes it - unless you have opened a url or search in it.  Then it opens another new tab.  That takes about 3 minutes of getting used to, and then it becomes far more of a useful feature than caps-lock has been since the days when we had to type in all our COBOL in all-caps.

The touch pad is also rather different.  It has no buttons.  Single clicks are just a tap, double clicks are a two finger tap.  A little hard to get used to, but effective.  What isn't clear at all to me is how to click-n-drag.  So far that's my main gripe. I'm reserving judgement for awhile to see how it goes.  That means not using a mouse as I normally do.

Speaking of which I plugged in my Logitech mouse to the single USB 2+ port, and it worked flawlessly.  I tried plugging bluetooth dongle in and it was quietly ignored.  It seems bluetooth is already onboard, but not yet accessible to a standard user.

Logging in with my main Google Apps account produced unsurprising results - but that's a good thing! I fully expected that my apps and bookmarks would sync to chrome-the-browser and wasn't disappointed.  ChromeOs has a couple of apps pre-installed that are now synced to my chrome-the-browser, but nothing that insults my intelligence or anything.  Gtalk, a notepad, Gmail.

It's a browser-in-a-box.  You already know this.  It is very fast.  In every case (except one, mentioned below) the limiting factor for speed was my network connectivity.  Battery life self-reports in the neighborhood of 8 hours from a full charge and seems right on.  It suspends rather than locking the screen, but you'd never know it, touching the touchpad immediately restores your session.

The normal user mode has access to a limited CLI shell called "crosh." It is mostly useful for acquiring diagnostic information as there are very limited capabilities for setting anything.  There are some certificate utilities that I don't know anything about as yet also.

The Bad News
The Verizon data activation has a lot of issues.  Mine is hanging at a partial activation, like many others.  Verizon was unable to help as they didn't have the ESN/MEID in their system.  Google has a team to help with this issue, and they are working to resolve it. I am expecting a call this morning to try and get mine activated.  I will update after that call.
Posted by Jonas Bull at 10:24 AM

• CRISIS IS OPPORTUNITY
• STOP DOING WHAT DOESN’T WORK
• ACTION IS REALITY
• YOU DON’T HAVE TO FIX EVERYTHING TO START FIXING SOMETHING
• EDUCATION IS PAINFUL
• FAIL HAPPENS. GET BACK UP
• IF THEY AREN’T CALLING YOU CRAZY, YOU AREN’T TRYING HARD ENOUGH