There are no “good guys”.
No heroes born.

You aren't a good guy because of which side you happen to be on, whether you are a liberal or a republican. You don't get a pass because you wear a red hat or a blue uniform. You can’t hide behind a flag or a cross.

There is no such thing as a good person.

We obsess over "good guys" and "bad guys" as if simply being on one side of a line defines good or evil.  We fail to realize that no one wakes up choosing to be the "bad guy".  What we think of as evil is usually just people failing to choose good.

We live in a time when bad things happen in the name of good. We live in a world where people are swayed by appeals to their worst, secret impulses.

Whoever you are, however small you feel yourself to be, you can choose to stand for good in the small things.

Whatever you have done in the past, you can acknowledge your mistakes.  You can do the right thing now, whether anyone forgives or believes you.

If you are powerful, do not be complacent, use your power wisely and with care for the future.

There are no heroes. Not until someone makes a choice to do the hard thing, the right thing. Sometimes they are ridiculed.  Sometimes they die.  Sometimes they get a medal. But whatever the outcome, they weren’t born that way.  It wasn't because of a uniform or a country of origin or a religion.

They are heroes because they made a choice and took that action, and they kept doing it, over and over. 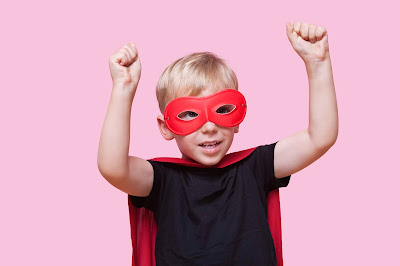 If you have the choice between safe and awesome; choose awesome.
Posted by Jonas Bull at 7:00 PM No comments: Links to this post 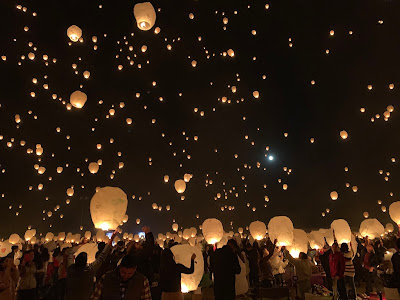 We wrote names of lost loves , dead friends and parents, quotes and thoughts on the lanterns. We drew ornate designs or childish hearts and trees on them. We cried over these thoughts and memories, staining the paper lanterns with tears.

Then we lit the little fire and launched a piece of ourselves into the night. We watched our lantern join thousands of others in a surreal display. We felt joy and wonder.

None of us knew what thoughts flew with the thousands of lanterns. What prayers, hopes, dreams and memories lit their spark. We didn’t know and it didn’t matter. What mattered was lighting the night. What mattered was the shared joy of making magic.

And we could see, all the while, those same lanterns that we had poured a piece of our souls into, falling back to earth. Dark, cold, trash to be collected. But god what beauty when they fly.

All the while more lanterns are being lit and launched. Over time they dwindled to only a few, to one last lantern of the night. 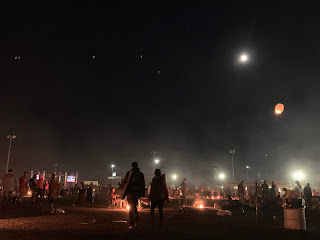 And that is the most beautiful part of the lantern festival. We know, every one of us, that the lantern is but a brief flicker, the light but a blink. We know this and do it anyway. Because the lantern festival is art. It is humanity in microcosm. It is the past, the future, and the eternal now.

Our lives, our children and our ideas, our hopes, dreams, and machinations are lanterns we laugh and cry over, then launch into the night. We, and they, will burn bright, then fade and fall. But god, what beauty when we fly.

This is your life. You don’t get another. Even if you are reincarnated or go to some afterlife or another, that being is not the being reading these words. The you of today has never existed before and never will again.

You can stay dark, choose to stay on the ground. You will still carry all these pains and hopes regardless. But you will carry them alone.

If you have the choice between safe and awesome; choose awesome!

Posted by Jonas Bull at 7:58 AM No comments: Links to this post

Reading is like exercise for your brain.  You can do the “safe” exercises, minimal effort, minimal impact.  OR you can read things that challenge you.

Posted by Jonas Bull at 8:40 AM No comments: Links to this post

What I Learned About Business Watching Bartenders

I don’t want to give the impression I spend all my time in bars.  But I am 48 years old, travel a lot, and was in the US Navy.  So I have seen a few things. 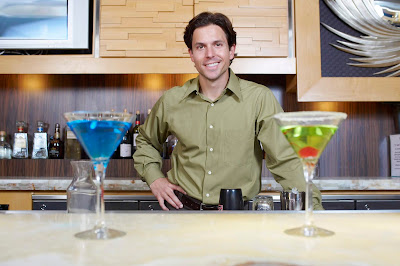 The one thing I have seen?
Great bartenders pay attention.

Think about what bartenders actually do:

Great bartenders pay attention to customers. Customers come to a bar to be served.  Some customers want high contact, some want to be left alone.  Some know what they want, some not so much.   Some are obnoxious.  Bar customers, though, can change over the course of an evening.   The same person can walk in with one personality or disposition, and a few drinks later be a totally different person.   Great bartenders are paying attention to their customers all the time. 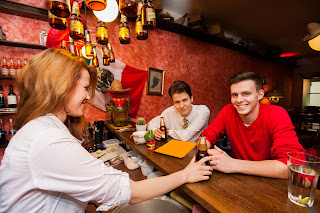 Great bartenders pay attention to their supplies.  While many bars have a barback who handles the physical movements of stock from the “back” to the “bar” it is still the responsibility of the bartender to ensure that the items needed for the shift are available and ready for use.  A good bartender makes sure to have more than enough stock.  A great bartender makes sure to have just enough so nothing is wasted or in the way.

Great bartenders pay attention to selling.  A good bartender will have some go to suggestions to help you pick a drink order.  A great bartender asks questions and makes something you will like from the the items she needs to move.  A great bartender knows bringing you back for five or six sales once a month for years is a better deal.

The fundamentals still apply.  When demand is high, peak times, great bartenders keep the chatter to a minimum, getting drinks to customers as efficiently as possible.  Additional staff may be scheduled for peak times.  During high demand times great bartenders don’t upsell.  They don’t need to.  As demand declines, though, great bartenders start making suggestions, upselling.

Great bartenders build relationships.  Even at a crowded bar on a busy night, a great bartender makes eye contact and makes an effort to remember your orders. Great bartenders learn just when to give you one “on the house” to keep you coming back. 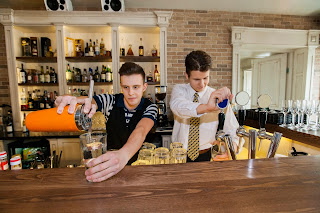 Great bartenders try new things.  They adjust recipes and try new combinations, they test on themselves and their customers.Great bartenders experiment well.  They don’t just try a new cocktail and forget about it.  They try something new, vary it, offer it to select customers and watch their reactions.  They fiddle and adjust.  When they have a winner they add it as a special.  Maybe it will eventually get added to the menu.  But the important thing is, they watched and learned what made the mixture better, what worked, what didn’t.

Can your business be better if you take a lesson from a great bartender? 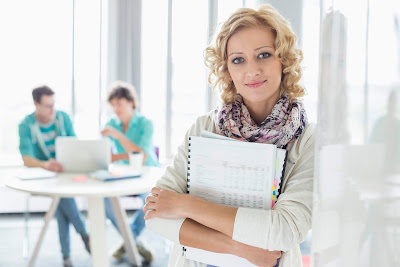 Posted by Jonas Bull at 8:24 AM No comments: Links to this post

Life is a psychology experiment

Posted by Jonas Bull at 8:41 AM No comments: Links to this post

Saying What I Want

https://link.medium.com/uIpBSUr8KY
I know EXACTLY what I want — I just don’t know how to get it, and I’m afraid it is impossible
Posted by Jonas Bull at 8:48 PM No comments: Links to this post

Entropy seems to be a pretty difficult concept to grasp.  And it can be slippery, but the basic idea is that a certain energy is associated with certain conformations, more for some, less for others.  Entropy says that moving from a lower energy conformation to a higher energy always requires an excess of energy.

The classic example is a teacup on a table.   The maker of the teacup invested considerable energy to gather materials,  form the cup, and bake it into its final form.   And finally , someone lifted it against the pull of gravity onto the table.  This energy is partially stored in the conformation, but some fraction of it is lost, essentially forever.

If the teacup is dropped, the stored energy of the gravitational pull immediately begins to be released, culminating in a final release of energy when the cup hits the floor, shattering and releasing much of its stored conformational energy. Entropy says you can't ever get the cup back the way it was without, that is, expending a tremendous amount of energy.

Now applying that principle to information security, consider a database containing sensitive information, such as a credit database.   That information has been gathered over years of people entering it, using credit cards, data feeds sending it to its ultimate home in the database where still more energy is expended to tabulate and collate it.  Finally, energy is expended to "secure" the information.  Physical security is energy expensive.   Logical security is as well, requiring devices, programs, and people to implement and , hopefully, maintain.

We are not surprised that a teacup falling from the table shatters and is lost, so it shouldn't surprise us that information systems are just as easily shattered.   What's the difference?  The big difference when applied to information security is that when a security system shatters, the spilled data, unlike tea, is now available for anyone to slurp up.  Moreover, the information itself isn't consumed, it is available for any number of slurps.  And is still available, even to the system whose security was shattered.

Unfortunately, if it is your information that is "spilled" that means you can't put it back in the cup.  As Rep. Debbie Dingle of Michigan said of the recent Experian breach, "You can't change your Social Security number and I can't change my mother's maiden name. This data is out there forever."


Posted by Jonas Bull at 1:37 PM No comments: Links to this post

Stuff I Wish I Had Time To Read